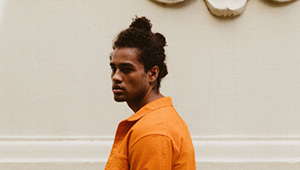 After dazzling critics and audiences with his explosive, impassioned debut album Black Thoughts, young rapper Ziggy Ramo is ready to set the live stage alight with a performance that draws on classic hip-hop, political fury, and collective trauma.

Raised in remote Arnhem Land and influenced by artists and activists from Yasiin Bey and Lauryn Hill to Charlie Perkins and Adam Goodes, Ziggy’s voice addresses the silenced injustices of Aboriginal Australia and other social issues, speaking truth to power and giving voice to the disenfranchised and dispossessed.

Released at the height of 2020’s Black Lives Matter protests, Black Thoughts articulated a powerful, compassionate perspective expressed through brilliant lyricism, a sense of spiritual renewal, and grooves that echoed Ziggy’s beloved, Golden Era of hip-hop. It was named Album of the Year at the SMAC Awards, while “April 25” took home the prize for Song of the Year.

With his livestream performance wowing audiences at the Sydney Opera House last year, Ziggy Ramo is one live act you don’t want to miss.