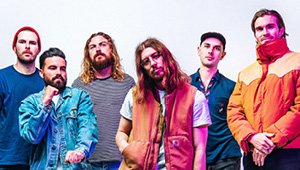 Returning to their home turf right on time for a laid back summer session, six-piece Sydney funk outfit Winston Surfshirt take to the Sunset Piazza stage for an evening of cool grooves, eclectic soul, and some sunny psychedelic vibes.

After cultivating a dedicated fanbase on Sydney’s Northern Beaches, the band broke out in 2017 with their steamy, platinum certified R&B smash, “Be About You”, from their debut album, Sponge Cake, a tasty mix of funk, hip-hop, airy vocals and bold brass. The band went on to sold-out Australian headline shows, festival appearances at Splendour in the Grass, and a support slot for Midnight Oil, while being feted by everyone from Beats 1 host Zan Lowe to Sir Elton John, who named them his “favourite band of the moment.”

Apple Crumble, the band’s widely praised 2019 follow up, featured more gems in “For the Record”, “Make a Move”, and “Smile”, with news.com.au raving that the album cemented Winston “as the prince of slinky Australian soul, funk and groove.”

No Australian music group is as impeccably charming as Winston Surfshirt.
– Beat