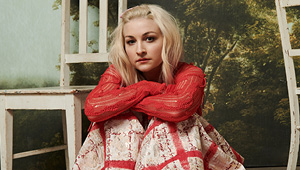 Fresh off the success of Child in Reverse, her first, long-awaited album in six years, singer-songwriter Kate Miller-Heidke returns to deliver the airborne melodies, sinuous grooves, and brilliant textures of her distinctive, beautifully crafted pop.

Trained as a classical singer at the Queensland Conservatorium, Kate Miller-Heidke is an award-winning singer-songwriter who effortlessly traverses the worlds of contemporary pop, folk, musical theatre and opera. Her top ten, multi-platinum albums O Vertigo!, Nightflight, and Curiouser have spawned hits including “Last Day on Earth” and “Caught in the Crowd”, for which she became the first Australian to win the grand prize in the International Songwriting Competition.

She has appeared with Metropolitan Opera in New York, composed The Rabbits for Opera Australia, worked on the ABC series The Divorce, and written and composed lyrics for the Helpmann award-winning Muriel’s Wedding: The Musical.

In 2019, Kate’s heartfelt performance and the out-of-this world staging of her original song “Zero Gravity” won her first place in her semi-final and a top ten placing at the Eurovision Grand Final.