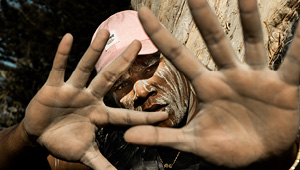 JK-47 PLUS DJ NES
One of Australia’s most talented new hip-hop artists – and Triple J's Unearthed Artist of the Year 2020 – is about to give Sydney a taste of his deadly skills of the mic.
Indigenous artist JK-47 has been penning rhymes and rapping since the tender age of 14, making a name for himself on his home turf in Tweed Heads South before exploding with a memorable verse on Nerve’s “Sunday Roast”, releasing his own blistering anthem, “The Recipe”, and the truth-to-power single “I Am Here (Trust Me)”.
In 2020 he won both Triple J’s Unearthed National Indigenous Music Awards and the Unearthed Artist of the Year, and dropped his acclaimed debut album Made for This – a record that captured the 22-year-old rapper’s searing energy, dynamic skills, and belief in the power of his community.
Whether he’s in collaborating with his ECB brothers, the Gratis Minds boys, or spreading positivity with his Kinship Collective, JK-47 is on a mission to touch the hearts and minds of those not just in his home country, but all around the world.