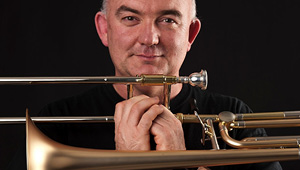 A master of the trumpet, piano, brass, sax and double bass, ARIA award-winner James Morrison is known throughout the world for his virtuoso talent as a jazz musician and sheer brilliance as an all-round entertainer. Joining James Morrison on stage for this memorable night will be special guests William Barton, Andy Firth and Alice Terry.

A best-selling recording artist, he has toured the world and performed with some of the biggest legends in jazz, including Dizzy Gillespie (who called him “one of the best”), Ray Brown, Dave Brubeck, Ray Charles, Quincy Jones, and Wynton Marsalis.

He has played everywhere from New York’s famous Village Vanguard and The Blue Note to Europe’s prestigious Montreux Jazz Festival.

Together, the James Morrison Quartet have taken the international music scene by storm, performing at major festivals such as BBC Proms with superstar Dianne Reeves, Melbourne International Jazz Festival with Patti Austin, and performing at famous jazz venues including Ronnie Scott’s in London.