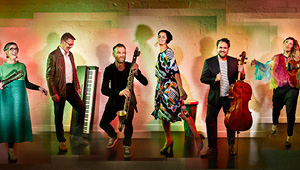 Together they bring to life the visionary sounds of living American composer Steve Reich, whose breakthroughs in repetitive patterns, phasing, tape loops and harmonic rhythm made him indisputably one of the most influential musicians of the late 20th century.

With Bernadette Harvey and Benjamin Kopp on piano, and Claire Edwardes, Mark Robinson, Kevin Man, and Kerryn Joyce on percussion.