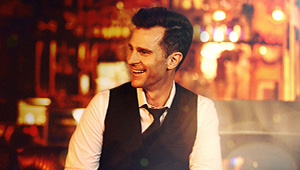 David Campbell - Back in the Swing

Known for his smooth, silky vocals and rousing musical performances, ARIA-award winning singer David Campbell is one of Australia’s most popular and versatile entertainers – and he’s bringing his Big Band show to town a big night of entertainment.

Campbell’s chart-topping, multi-platinum albums The Swing Sessions (2006), The Swing Sessions 2 (2007) and Good Lovin’ (2008) established him as a musical favourite, leading to an enormously successful run of sell-out national concert tours.

In 2019, his album Back in the Swing returned him to his musical inspirations, blending swing, ballads and R&B from artists such as Frank Sinatra, Billy Joel, and Stevie Wonder with the Aussie singer’s own personal style. The accompanying Big Band tour was a smash with critics and audiences around the country.

Campbell is among the country’s leading musical theatre stars, leading the likes of the Helpmann Award-winning Dream Lover: The Bobby Darin Musical, Shout! The Legend of the Wild One, and Stephen Sondheim’s Assassins. He is also an accomplished television and radio host, anchoring Today Extra, Weekend Today and the beloved Carols by Candlelight telecast, and hosting his own top-rating national show on Smooth FM.