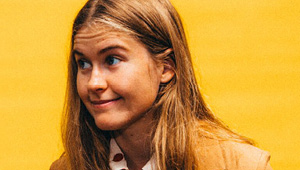 Alex the Astronaut delivers multifaceted folk pop with a supernatural knack for capturing the light and the dark of the human experience.

Alex the Astronaut plus DJ Shag

As a singer, songwriter and storyteller with a supernatural knack for capturing the light and the dark of human experience, Alex the Astronaut has fast become one of Australia’s most talked about young indie artists.

Her acclaimed debut album, The Theory of Everything, explores friendship, love, loss, pain and change, weaving a constellation of stories about personal reckonings through tracks like the anthemic “Happy Song” and the uplifting “I Think You’re Great”.

The album follows heart-swelling EPs and impactful songs including “Not Worth Hiding”, an open letter to her 16-year-old self that became the unofficial anthem of the Vote Yes movement during Australia’s marriage equality debate, as well as a triple j Hottest 100 smash and a favourite of Elton John.

Alex has since wowed audiences at Primavera Sound in Spain and the Great Escape in the UK, played Splendour in the Grass, and headlined a sold-out national tour back home.

This rising star is ready to launch into the cosmos.